Which Shave Club is Right For You?

Shave clubs have been around for awhile now, and there’s certainly more options on the market than when the idea was first pioneered. If you haven’t hopped on this trend yet, there are now many options available for you to choose from, so many so that it might be tough for you to find a company to start with. That’s why we’ve taken three of the most popular brands and run a shave club comparison so you can find which one is right for you! 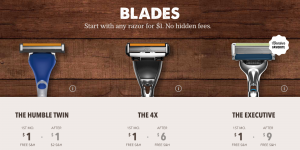 This one is where it all began. Founded in 2012 by Michael Dubin, Dollar Shave Club was designed as a solution to the inconvenience and high price of purchasing razors. The way it works is you first select between a twin blade, four blade or six blade razor. Then, you keep the reusable handle and new blades are sent every month for $3, $6, or $9 respectively. Dollar Shave Club also offers other bathroom products like shave creams and shower gels.

The quality of Dollar Shave Club razors obviously goes up based on the package you select. The Humble Twin is just that; a basic, simple razor for when you only need the minimum. Not the closest shave, but it works. The four blade is about on par with other razors of its kind. It feels like a disposable four blade, but the shave works and is fairly close. This blade is also very easy to rinse due to it’s open back design. Finally we come to, the six blade model known as the Executive. This razor gives the closest shave of all the brands, but sacrifices some of the rinsability of the four blade. The handle on the Executive is by far the best though, and is really the only one of Shave Club’s products that feels like a reusable razor.

The Humble Twin: $1 a month plus $2 shipping and handling

The Executive: $9 a month

These prices are very cheap; certainly a good brand for those who want to save money on blades every month. 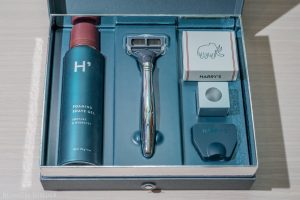 Harry’s was founded in 2013 as a competitor to Dollar Shave Club. Harry’s principles are quality design by real men, for real men. The company’s goal was to provide inexpensive, subscription based razors without sacrificing durability or design of the product. Harry’s offers two models; the Truman and the Winston. The Truman is the basic model, and the starter kit is $15. This razor features a plastic handle. The Winston has a zinc, polished chrome handle with rubber grips. Both razors use the same blades, which can be purchased in packs of four, eight, or sixteen a month.

Harry’s razors are typically hailed as a higher quality than Dollar Shave Club’s, providing a smoother shave that’s just as close. However, unless you get the Winston model, your handle isn’t going to be the highest quality (albeit great looking). A plus of Harry’s is definitely that both handles use the same quality blades, so you can buy the cheaper model razor and still get the same shave. But, there have been some complaints of nicks and cuts with this brand.

Truman: $9 for one handle and blade, $15 for starter kit with handle, three blades, shave gel or cream, and a travel cover

Winston: $20 for one handle and blade, $25 for starter kit with handle, three blades, shave gel or cream, and a travel cover

This price is steeper than Dollar Shave Club’s but most will tell you you’re getting your money’s worth. However, if you simply want the basics and don’t have high demands for razor looks or quality, you might want to stick to Dollar Shave Club.

Gillette started losing its share of the market due to Harry’s and Dollar Shave Club, so it rebranded its shave club as Gillette On Demand to try and regain customers (even using a “Welcome Back” campaign aimed directly at the two companies former users). Gillette offers the Sensor 3 disposable razors, the Mach 3 turbo, and their signature Fusion ProShield. Each order comes with 8, 5 and 4 blades respectively. Gillette tries to distinguish itself in the subscription razo market by not requiring a subscription; razors can be ordered online at any time. However, if you subscribe, every fourth order is free.

There’s no argument; Gillette’s blades are the best on the market. The Boston-based company has mastered their craft, and although selection is more limited, their subscription-based razors are no different. If you’re looking for the highest quality subscription shave service, you’ve found it. However, design-junkies steer clear; the Gillette shave service doesn’t have the aesthetic or charm of Harry’s or even Dollar Shave Club’s.

These prices are steeper than Dollar Shave Club and Harry’s if you want the five blade, but at least you get the quality you pay for. However, if you want a three blade with Gillette, you might consider the Dollar Shave Club’s four blade for $7 cheaper. You’ll lose quality, but the discount is worth it if you’re not picky. You could also move up to Harry’s Truman model from a three blade subscription with Gillette and still save some dime. However, keep in mind every fourth delivery with Gillette is free if you subscribe, so that reduces the cost, too. 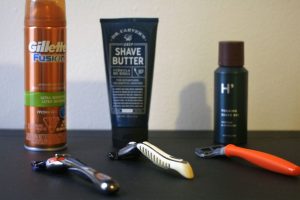 At the end of the day, it’s all about what your personal preferences are. All three brands have strong points, and subscription based razors are definitely convenient. No matter which brand you try, we definitely recommend a subscription shave service for both the convenience and the price.

Need more tips on how to be a clean gentlemen? Check out our guide and video on how to tie a bow tie!